Offshore (average) surface water temperature - Includes from the 5 to 6 mile mark at the 100 fathom line, then to the 1,000 fathom line being about 32 miles: 84° The warm water is still holding up.

Blue-water: (Chlorophyll amounts and surface temperatures from Terrafin SST). What a change from last week to this week! For the last several months the clean water was hurting our inshore fishery. Now, almost overnight, the green water is hurting it. There does not seem to be an easy transition. It appears to be black or white. See the photo below and scroll down to the past several weeks to see what I am talking about.

Offshore: The sailfish and dorado action is still decent. The boats are averaging 3 to 4 raised sailfish a day.  There are a few dorado, but scarce. The yellowfin tuna are not around.
Inshore: This phenome of clean water, replaced by green water in less than a week is something I have never seen before.  I am going to speculate the strong blue water current has moved a bit offshore, and combined with a drop of a couple of degrees in temperature, an algae bloom happened. 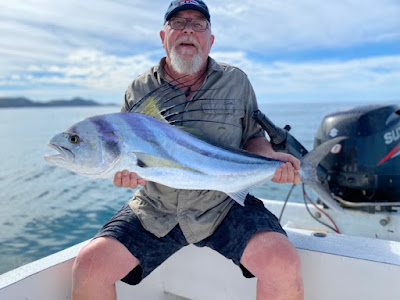 Regardless, the roosters are smaller this week and fewer. There are still several large jack crevalle, because they thrive in this kind of water.