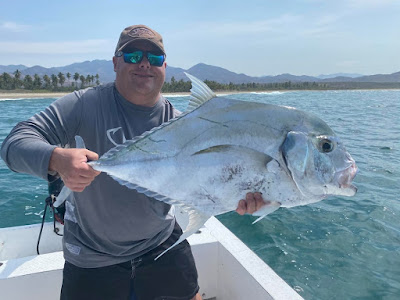 Offshore (average) surface water temperature - Includes from the 5 to 6 mile mark at the 100 fathom line, then to the 1,000 fathom line being about 32 miles: 83° The traditional cooling trend appears to be starting with cooler water pushing down from the north..

Offshore:  The offshore action sucks. With this last full moon, if you catch a sailfish you are doing better than the rest of the fleet. I do not expect this trend to turn around anytime soon. No reports of any dorado or yellowfin tuna.

Inshore: Early this week the inshore was fantastic, with a few roosters and lots of jack crevalle. Adolfo, on the panga Dos Hermanos took advantage of this and did well.

Then the super full moon hit us, causing huge waves, and cooler water moving in. The fishing flat out shut down.

I was guiding fly-fishing client John Stielow of Min. with Cheva on the panga Dos Hermanos II, with his son Alejandro casting the hookless teaser popper.  John was casting the 10wt fly rod well and should have gone back to the hotel tired from catching fish, instead of being tired from casting all day. The fish were just not hungry or aggressive. They would follow the surface popper all the way to the boat, but under the surface, then switch over to the fly, and do the same.

Near the end of the day, Cheva took us to his sweet spot, where he got 10 roosters last week for his clients. We no more than got there, and a damned bufeao (false killer whale) surfaced just behind the boat. Cheva’s face just dropped. He knew he had lost the entire day for his client. When bufeaos show up, every game fish in the area gets out of Dodge, as fast as they can. It certainly wasn’t Cheva’s fault, but these guys take their fishing seriously and want to get fish for their clients.