Offshore (average) surface water temperature-Includes from the 5 to 6 mile mark at the 100 fathom line, then to the 1,000 fathom line being about 32 miles: 84°
Inshore (average) surface temperature. From the beach to about 5 miles: About 84°
Blue-water: (Chlorophyll amounts and surface temperatures from Terrafin SST) Blue-water is near the beach, and all the way out. Near the beaches are spots of very chocolate water from the blown-out rivers, but with the strong blue water current, there are also many clean areas. In the below satellite photo, the green water (high in chlorophyll) shows the locations of the principal rivers on this coast. All of them are open and discharging nutrient rich water.

Offshore: Very slow, with few sailfish or dorado being taken. Fishing partners Craig Manalili and Pat from Seattle fished a day with Cheva offshore on the panga Dos Hermanos II. They released one sailfish, and a second threw the hook shortly after the strike. This was considered a decent day for this week, because their other fishing partner, Darren Kai of Hawaii, fished with Jesus (pronounced Hay-sus) on the panga Dos Hermanos III, and never had a strike.
With the full moon next week, I do not expect fishing conditions to improve until after the 22nd of this month. 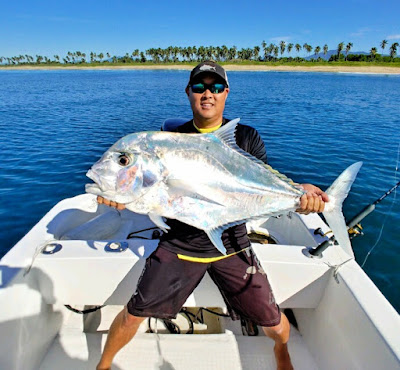 Inshore: Roosterfish and large jack crevalle provided a lot of action this week, plus additional tasty gamefish like pargo and pompano. Going north to the Ranch or even closer in at Pantla is producing mostly large jack crevalle, with 12 to 15 a day being realistic. The roosters all seem to be to the south and down at Petatlan and the antennas. There are also many jacks down there also.