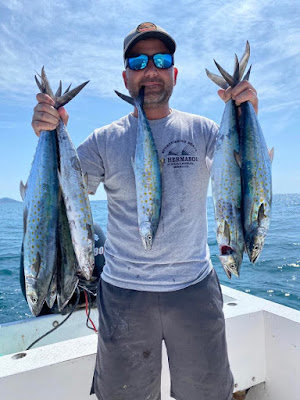 Offshore (average) surface water temperature - Includes from the 5 to 6 mile mark at the 100 fathom line, then to the 1,000 fathom line being about 32 miles: 83° The traditional cooling trend appears to be starting.

Blue-water: (Chlorophyll amounts and surface temperatures from Terrafin SST). Off colored water from the beach to the 100 fathom line, with blue water on out.

Offshore:  The sailfish action is still on the slow side with only 1 or 2 per boat per day. There are still a few dorado being taken when trolling for sailfish, and they are of a decent size of over 20 pounds.

Due to the cooler water moving in, the blue marlin and tuna are showing up. On one day this week, four blue marlin were taken, with a few taken every day, along with a lot of missed strikes.
The yellowfin tuna have also shown up, but out about 35 miles. Most are in the 40 to 80 pound range, but a few larger have been taken.
Inshore: With the green water, the jack crevalle are more dominant now, with the roosters making a disappearing act. We had a couple of days of high waves on the beach, which shut down the normal casting to the backside of the waves to find feeding fish. With high waves, the baitfish can’t take the pounding and move offshore to feed.
Adolfo, on the panga Dos Hermanos, is ever alert and attentive to all the conditions saw birds working on porpoise about a mile offshore. Brian Hetland was his client, and Steve Stoor. When they pulled in Adolfo Jr. made the first cast with a surface popper. It was the last cast he made as the ocean exploded with hungry jack crevalle. Jr. spent the next 92 minutes unhooking and releasing fish while they came in at a fish on with every cast. Even his dad was fishing and catching.

It was so crazy, while Jr. unhooked Brian’s fish, Brian laid his rod down and tailed another for his fishing partner. 92 minutes later, they all agreed to head back to the dock.