Offshore (average) surface water temperature - From the 5 to 6 mile mark at the 100 fathom line, then to the 1,000 fathom line being about 32 miles: 83° The traditional cooling trend appears to be starting.

Blue-water: (Chlorophyll amounts and surface temperatures from Terrafin SST). Conditions are shaping up rather nice this week with slightly off-colored water from the beach to the 100 fathom line, with clean and blue water on out.

Offshore:  The sailfish action is still on the slow side with only 1 per boat per day, or less. Some yellowfin tuna are being taken, but at 35 – 40 miles, it is a long day to chase them. Dorado were scarce this week.

Blue marlin are still around, with a few being hooked.  Last week, fly fishing client John Stephenson had a tough 2 days fishing with Cheva on the panga Do Hermanos II. They were into the jacks and even a large rooster, but getting them to bite was a different situation. Early this week he wanted to try for a sailfish on the fly. He had never caught one before, and I told him Cheva is still his best bet. He ended up in a tough 1½ hour battle with an estimated 200 pound blue marlin. A fish of a lifetime on the fly rod. 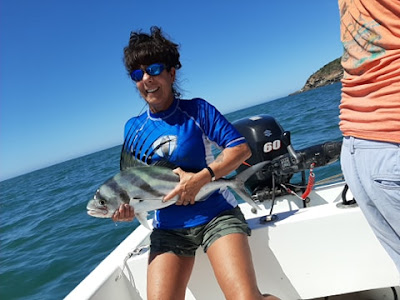 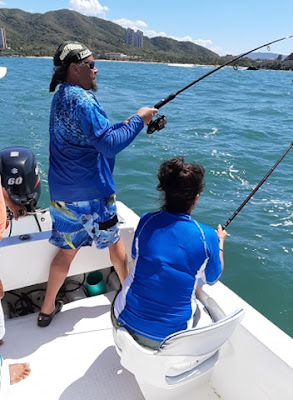 Inshore: This week was a whole lot different than last week. Sierras, jack crevalle, roosters, black skipjacks, and even several small dorado. We had them all. The best reason for the difference between the two weeks was the high surf last week, and the inshore waters clearing up this week to almost ideal conditions.

Kyler Reis of Seattle fished a day with Cheva. They got several jack crevalle to 25 pounds, and then the bufeaos moved in. They look like a porpoise, but are black and much larger than a six foot porpoise. They are false Killer whales. And, very intelligent.

After Kyler caught another large jack, the bufeo played with it for several minutes before Kyler finally reeled in a head.