For the last couple of months, the weather had been picture perfect every day. Until about noon today (Thursday) when it started to cloud over and the temperature dropped from about 90° to about 75°. A low pressure had settled over us and sucked down moisture from the north. Living closer to the airport than Zihuat, we only got about a ¼ of an inch of rain, but areas further north got more. We could hear the thunder to the north and out west on the water. Cheva and Jesus on the Dos Hermanos pangas said it rained hard on them, but there was no wind. We can get rain in January or February, but it is rare. A normal year will see no moisture at all from the end of October to the first week of June.
When Adolfo and Jesus (Hey -sus) each had a cancellation, what is a guy to do? Knowing there were only Honey Do's at home (Honey do this, honey do that), the obvious thing was to explore new areas and a potential new fishery. Adolfo gave his deckhand (Junior) the day off, knowing he would be subject to
taking care of the Honey Do's. This once again proves youth, ambition, and hard work will lose out every time to age, experience, and deceit. Anyway, with the river bar open at Petatlan, they got the panga up into the mangrove-lined lagoon. A nice snook was the reward.
Offshore (average) surface water temperature - Includes from the 5 to 6 mile mark at the 100 fathom line, then to the 1,000 fathom line is about 32 miles: 85° The warm water is still holding up.
Inshore (average) surface temperature. From the beach to about 5 miles: About 84°
Blue-water: (Chlorophyll amounts and surface temperatures from Terrafin SST). Unchanged for the last couple of weeks, the blue-water is near the beach and all the way out. Near the beaches are spots of lightly discolored water, but very few. (See photo below). 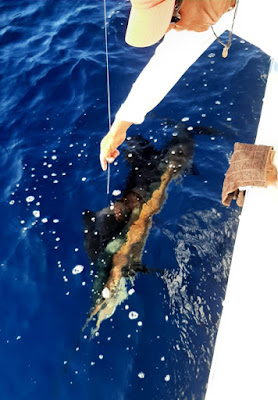 Offshore: Sailfish and dorado action is still decent. The boats are averaging 2 to 3 raised sailfish a day, and usually getting a nice dorado.
Inshore: The fishing for roosters and jack crevalle has been a tough situation this last week. The problem is the gin clear water. Only a few spots on the coast have the favorable slightly discolored water, and they change from day to day.