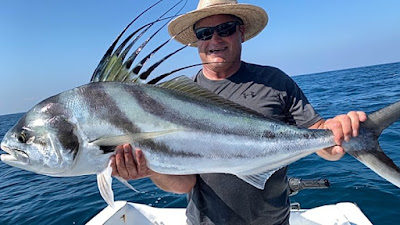 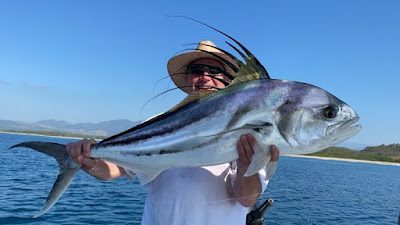 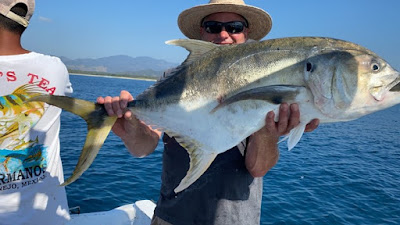 Offshore (average) surface water temperature - Includes from the 5 to 6 mile mark at the 100 fathom line, then to the 1,000 fathom line being about 32 miles: 86° The warm water is still holding up.
Inshore (average) surface temperature. From the beach to about 5 miles: About 84°
Blue-water: (Chlorophyll amounts and surface temperatures from Terrafin SST). Unchanged for the last couple of weeks, the blue-water is near the beach, and all the way out. This makes for very tough inshore fishing for roosters. (See photo below).

Offshore: The sailfish and dorado action is still decent. The boats are averaging 2 to 3 raised sailfish a day, and usually getting a nice dorado. Longtime visitor, Brian Hetland of North Dakota, fished one day with Cheva on the panga Dos Hermanos II, and had a great day. Using spin gear he released 7 sailfish and got one dorado. 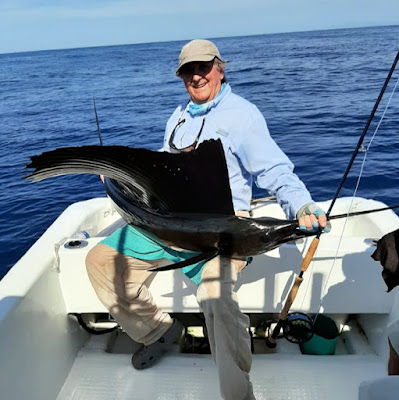 nshore: The fishing for roosters and jack crevalle has been a tough situation this last couple of weeks. The problem is the gin clear water. Only a few spots on the coast have the favorable slightly discolored water, and they change from day to day.  However, Adolfo on the panga Dos Hermanos made the long run to Puerto Vicente Guerrero and found big roosters and large jack crevalle. Due to the finicky conditions of the sea, Adolfo may have a few days where he has a problem finding fish, but it will not be long and he will be back in the thick of them. That is why they call him the Roosterfish King.